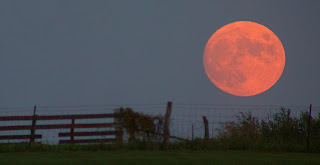 I am intrigued by the moon.  Last night I was laying in bed, and I looked over out my east window to see the moon glowing in perfect view.  It dawned on me that the moon and its phases would be great for teaching the kids for a fun science class.


There are 29.5305882 days in the moon cycle, according to the astronomer at The Franklin Institute .   The moon controls the waves...more on that coming up below.

We just had our Harvest Moon, which is the full moon closest to Autumn Equinox. On the night of the Equinox, the moon was at a 99% Waxing Gibbous, which is just about full. (many people thought the moon was full, but it was actually not 100 percent full until September 23 at 5:18 A.M.   (AM?  Yes!  read on...)


First I want you to watch a video of the moon's phases.


The moon's phases explained by the astronomer from The Franklin Institute.
Moon Phases


For each day following the above, the moon will rise about fifty minutes later than the previous day.


My favorite moon is The Blue Moon...why, because that is when I clean!  Just kidding, I don't clean that often!
A blue moon can refer to the third full moon in a season with four full moons, or the second full moon of a calendar month.


A "blue moon" is also used colloquially to mean "a rare event", reflected in the phrase "once in a blue moon


I got this info below at this site

What are the Phases of the Moon?

8 Phases of the Moon


Here is another great site for information on the Moon...   More info

As you know, when reseaching anything, you can easily be redirected toward another learning experience...as I did here, from moon to ocean!

Almost everyone is aware of the role that gravity plays in our lives. Not only does it keep our feet planted firmly on the ground, but it also keeps order in the solar system. The gravitational forces associated with the Sun and the planets interact to describe the orbits that we are familiar with, as well as keep the Moon trapped in orbit around the Earth. These forces aren't only limited to managing the dynamics of the celestial bodies, however. Gravity also has a more directly observable influence on our planet. Specifically, gravitational forces are responsible for the rise and fall of the ocean's tides all over the world.

The two primary agents when it comes to the motion of the ocean are the Sun and the Moon. Since the gravitational influence of an object is directly related to its mass, the Sun has a definite advantage over the moon when it comes to the strength of its forces. However, since the Sun is over 380 times farther away from the Earth than the Moon, the smaller mass in orbit around us is able to exert its effects on us much more strongly than the star.

The key when it comes to understanding how the tides work is to understand the relationship between the motion of our planet and its moon. Both the Moon and the Earth are constantly moving through space. Since the Earth spins on its own axis, water is kept balanced on all sides of the planet through centrifugal force. The Moon's gravitational forces are strong enough to disrupt this balance by accelerating the water towards the Moon. This causes the water to 'bulge.' The Earth's rotation causes a sympathetic bulge on the opposite side of the planet as well. The areas of the Earth where the bulging occurs experience high tide, and the others are subject to a low tide. However, the Moon's movement around the Earth means that the effects of its forces are in motion as well, and as it encircles our planet, this bulge moves with it.

The height of the tides can vary during the course of a month, due to the fact that the Moon is not always the same distance from the Earth. As the Moon's orbit brings it in closer proximity to our planet (closest distance within a moon cycle is called perigee), its gravitational forces can increase by almost 50%, and this stronger force leads to high tides. Likewise, when the Moon is farther away from the Earth (furthest distance is called apogee), the tides are not as spectacular.

The Moon's influence can also be balanced out by the position of the Sun – if the Sun and the Moon find themselves 90 degrees apart in relation to an observer on the Earth, then high tides are not as high as they normally would be. This is because despite its greater distance from the planet, the Sun's mass allows it to exert enough gravitational force on the oceans that it can negate some of the effects of the Moon's pull. This phenomenon of lower high tides is called a neap tide. In the same way, when the Sun lines up with the Moon and the Earth, as during a Full Moon, then the Sun can act to amplify the tidal forces, drawing even higher tides. These are known as spring tides, named not for the season, but for the fact that the water "springs" higher than normal. The variance in the height of the world's tides also depends on the local geography of the coastline and the topography of the ocean floor.

Tides occur regularly in the sense that they can be expected twice a day, but their periods do not coincide with the 24 hour day that we use for our calendar. This is because the Moon takes slightly longer than 24 hours to line up again exactly with the same point on the Earth - about 50 minutes more. Therefore, the timing of high tides is staggered throughout the course of a month, with each tide commencing approximately 24 hours and 50 minutes later than the one before it.
Posted by That's my story and I'm sticking to it, at least for now. at 5:36 PM

This is my eclectic blog. I discuss all kinds of issues and share tips, on things such as health, homeschooling, exercise, the enviroment, my family and what is going on with us, trips etc...whatever is on my mind at the time.
For a great list of homeschool sites, pan down to bottom!

CURRENT MOON
about the moon

Sparkpeople is free. For Health, Fitness and or Diet